12 replies to this topic

So I came across a few pics of the mysterious "Haunted House" playset that was teased, but never revealed to the wider public. I apologize if any of this information is already well known. Ive been unable to find anything of it anywhere online, so wanted to share it with others. Ive been 'keeping my eyes peeled' for the last 25 years, so its pretty cool to finally see what the damn thing looks like. lol

For a quick comparison, here is what the original 'Super Scary' ad looked like on the back of the box. 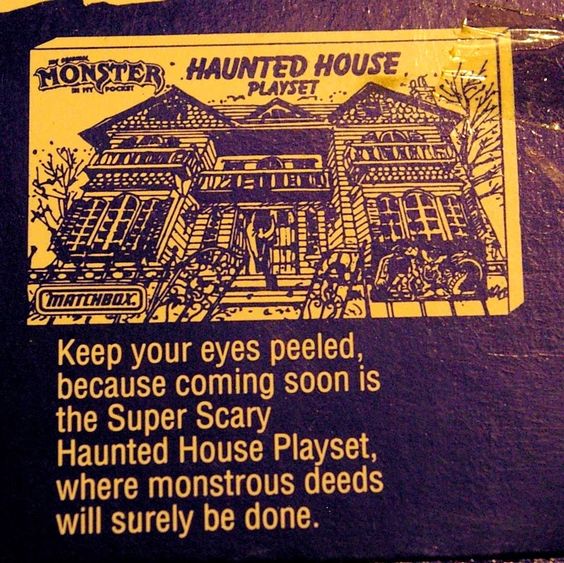 And here is what I found in the 1992 Matchbox vendor catalogue. I would assume it was the same one that was on display at the 1992 Toy Fair, and likely the only prototype. 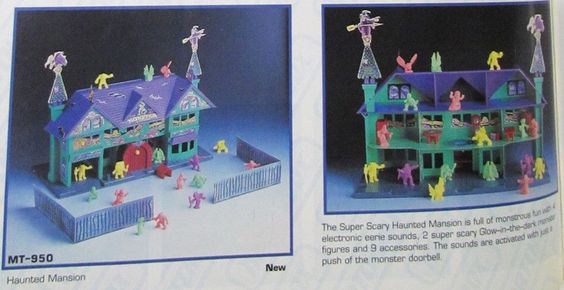 The obvious thing you will notice, is that it doesnt really look like what they had earlier advertised. I mean, it does have 3 steeples, and the windows are kindof similar. But the balconies are gone, and the windows on the left side are gone.
I would say overall its underwhelming actually, and thought it seemed kindof out of place for the figures. I mean why does it look so empty inside? Why do they have a garage? Why do they have a doghouse?...

Well, theres good reason for that. After doing some more digging, I discovered this playset is taken from an older Matchbox toyline called 'Oh Jenny!', from around 1987.

That explains why it feels so different, and why there is a doghouse... Though, going by the Archie comic series, I guess the original dollhouse wouldve been appropriate. The monsters did live in one for awhile.

It looks like all they really added to the Haunted House (besides the new paint job) was a couple cardboard roof turrets, some spooky stickers scattered around, and the monster doorbell (which I assume had the same generic noises as the Super Scary Howlers). The fence looks like card or foam board someone drew on with a sharpie, so likely was meant to add a bit to the display at Toy Fair, but wouldnt be sold with the actual playset.

Its also worth noting that they were skimping out a bit by only including 9 accessories, since the 'Oh Jenny!' playset had far more. It mightve been to cut costs a little, or maybe the monster doorbell was more expensive to make since it involved electronics? They would also be saving money by reusing the old 1987 molds, so maybe the toyline was under-performing at this point anyway? I dunno.

Still, its kinda cool to at least see what it wouldve been like.

Crap, looks like 'theassassin' beat me to it a year ago. Heres his thread with some very nice and large scans, and a much better look at the playset.
http://www.littlerub...howtopic=245574

After looking at the larger pics, Ive noticed a couple more things. It looks like they removed the window frames from the Oh Jenny version completely. What I initially thought were stickers appears to be pieces of colored paper they cut out with an exacto blade and glued onto the house and windows? Also noticed there are a few cutouts of what appears to be monsters sitting on the roof steeples as well. Since they refurbished and cut so many corners on everything else, Im now wondering if even the monster doorbell was taken from something else too?

The project was doomed to fail lol

Heheh. I was thinking the same.

And youre right. It wouldnt be hard to make a replica if someone really wanted to do it. I could try to paint some replicas of the stickers and make them into a sticker sheet sometime if enough people were interested. And with 3d printing, you could probly come up with some way cooler accessories like coffins and tombstones for a graveyard or something.

Or you could just make the Jotun Troll tear ass in that red convertible that comes with the playset.

Heh. I actually bought an oh jenny hoise not long after assassin posted the catalog. I was always looking for house playsets I could customize into a haunted one. And I came across the oh jenny/penny one a few times, so I when I saw assassin's pic I recognized it immediately. Anyway I wanted to post a pic once I finished the custom....its been in my "to do" pile since

Heh. I actually bought an oh jenny hoise not long after assassin posted the catalog. I was always looking for house playsets I could customize into a haunted one. And I came across the oh jenny/penny one a few times, so I when I saw assassin's pic I recognized it immediately. Anyway I wanted to post a pic once I finished the custom....its been in my "to do" pile since

Thats cool. Definitely post some pics if you ever get things rolling, Id love to see it.

Interesting find, I never knew it was reworked from that other playset, thanks for sharing

Did a little more research on this following Wurdulac's discovery.

Seems the house was created and designed in the UK by some combination of Seven Towns Ltd and Origin Products Ltd. It was originally released in the UK in 1987 by Bluebird Toys under the "Oh Penny!" brand, and was called "Penny's Big House Set". It was then released in the US in 1988 by Matchbox Toys under the "Oh Jenny!" brand, and was called "Jenny's Dreamworld". There are quite considerable differences between the two products, but putting aside the figures, accessories and other included pieces to focus on what us MIMP collectors care about - the actual house itself - it seems the only differences are the stickers used/included to decorate the house. Both the sticker designs and quantity used/included are different, with the US set having far more than the UK set. Other than the stickers though, the actual house piece appears to be the same, even down to the colors the plastic was cast in. The two versions seemingly come up on ebay.co.uk and ebay.com fairly regularly if anyone wants a closer look (don't forget you can check completed listings if there's no active listings)

Some more details on the creation and development of the Oh Penny/Oh Jenny line can be found here - http://www.onlypolly...ocs/Page41.html

It's cool to know that the house itself can be gotten hold of, if someone wanted to attempt a custom conversion. Though in addition to the MIMP themed stickers, another obstacle would be the unique front door (with doorbell) piece of the MIMP version (which presumably housed the electronic sounds aspect mentioned in the 1992 Matchbox catalogue) which presumably remains unobtainable - unless someone discovers it too was re-used from another (released) toy?? Now there's a challenge... Here's the only picture we have to go on:

Did anyone ever get around to customizing the oh penny house or making a sticker sheet? I got my hands on my sisters oh penny house and am going to start disassembling it to get it ready for paint. Popping the windows out have proven to be a task because they are glued in, at least mine are lol.

"If there is magic on this planet, it is contained in water"--Loren Eiseley

Yeah, sorry have't really tried yet. It's been collecting dust on my porch for a while now.

The doorbell in the photos was most likely just a mock-up that doesnt even work. Probably foam or balsa wood. It would be fairly easy to reconstruct and actually make work by removing the sound mechanism from a howler figure and rewiring it to a button.

Or it could even be 3D printed. The only actual molded detail on it seems to be the outer edge ridges. The front door where the button is seems to just be a sticker as well.

With the Monster in My Pocket figures in it, it looks smaller than the Oh Jenny version for some reason. I just watched this review, and it seems huge...

In my screenplay, the doll house was impossibly huge based on anything I saw at F.A.O. Schwartz at the time, and the Miles family seemed pretty working class.  I had imagined Warlock's monsters going with the Raven family and Stephen King playing Edgar as a self-parody, and once he becomes aware of the monsters, he pulls put all the stops.  This also explained why Gremlin was a good guy in the comics and a bad guy in the video game.  He got kidnapped to build the plumbing (one of the earliest gremlin stories had gremlins trained to fox airplanes rather than break them) and got a bit carried away due to his mischievous nature.  Also inspired by the cartoon, high levels of emotion broke the miniaturization spell, and falling off the crane did that for Gremlin, the first to be restored to size.

Back to Monster In My Pocket