45 replies to this topic

コンプREX No 5 was finally released today

I pre-ordered a copy which should be arriving next week sometime. I will post pics and more details when it arrives.

Automated Online/Overseas sales should be up within the next few days. You can always call or email the shop if you want it sooner

Note:
With the creation of the Japanese Keshi Category, I thought it would be best to start a general keshi コンプREX thread, as the Kinkeshi コンプREX thread was too Kinnikuman/Kinkeshi specific to really jive with later issues and information.

Hey uooz, you happen to know what the previous issues were about? Other than the Kinnikuman issue, obviously. I haven't paid attention at all since that one was released.

Reminds me of another book... I'll make a thread for that later.

Hey uooz, you happen to know what the previous issues were about? Other than the Kinnikuman issue, obviously. I haven't paid attention at all since that one was released.

Reminds me of another book... I'll make a thread for that later.

I will give you a quick run down.

Oh, and by the way, I think you should really enjoy the new issue as it is pretty much all Tokusatsu keshi.

Here is a link to all the other issues - click on the cover for more images and details:
http://www.mandarake...blish/comp-rex/

Online Sales are now up and running

To order, either complete the checkout process in Japanese: http://ekizo.mandara...em-MSCREX5.html

Use the English contact form to request the item: http://www.mandarake.co.jp/en/contact/
With this option, you send them the link to the new issue or the item name, and they will create a custom PayPal invoice for you, or give you other instructions on how to pay, shipping details etc.

Oh, and by the way, I think you should really enjoy the new issue as it is pretty much all Tokusatsu keshi.

Thanks for the quick answer! I might just do that, but I'd almost rather wait and see if they cover Ultraman or Godzilla. Not that I have anything against Kamen Rider! Quite the opposite - see avatar.

Uoozman, thanks for all the keshi-goodness you've been sharing lately! I'll definitely be ordering the remaining issues I need!

Man, I wish I could read Kanji. These seem like they would be excellent reference tools.

Man, I wish I could read Kanji. These seem like they would be excellent reference tools.

It is never too late to learn! Just focus on the most common ones - makes a real difference.

Wow these are awesome. I am going to order an issue. Thank you for the post!

"Do your damnedest in an ostentatious manner all the time."
-George S. Patton

My issues of コンプREX 05 finally arrived today! Very cool stuff this time around. And the best part..... a teaser at the end of the issue hinting that the next issue will be Kinnikuman related! 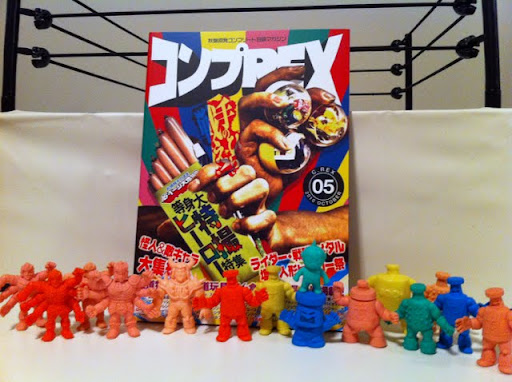 Also a few figures I had them throw-in from the Mandarake Micro Shop.

Want a window into my demented mind? toys, movies, cool stuff around the world @ http://cthuluconnect.blogspot.com/

Ya, I was excited to finally get a flesh one of those. Also needed to bolster my 100t collection

The Microkan is pretty rad - they will look for any keshi you need, and ship cheap. Everything in the pic (including the コンプREX) shipped for $10, 3 day DHL service.

A quick snap-shot of the section on Ultraman Keshi. 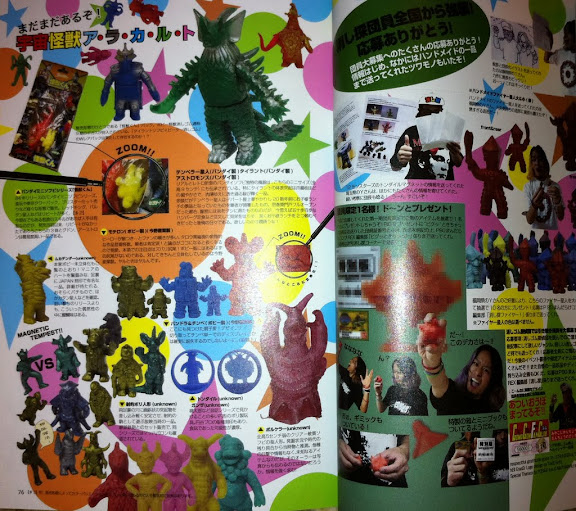 If you have an iPhone, I would highly recommend the Kotoba app. It includes the complete Japanese school system Kanji curriculum - great way to learn on the go at any level.

Mandarake English Auctions currently are listing all the Keshi from the most recent issue of コンプREX!

The Mandarake Microkan is holding a special Keshi event on the 26th of this month, and will be showcasing their new コンプREX themed keshi!

If you have ever read コンプREX, you will notice that there are two mascots that show up in every issue that take you through the Mandarake keshi facts and finds. C-Rex who plays the aprt of the sidekick is kinda like a plant dinosaur hybrid creature and now he has his own keshi! Wow! Ya, they were available only by special drawing on New Years... crazy expensive.

This is the one I really want from Mandarake though... I think they do the drawing for this one today 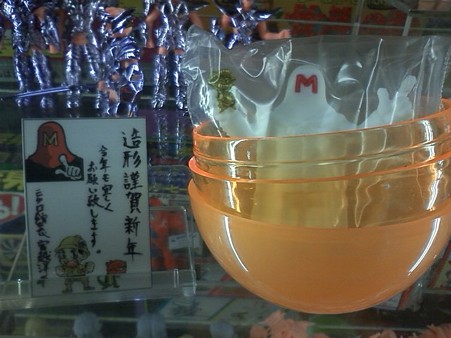 The Hooded M is the Mandarake mascot, and he is holding a C-Rex keshi which is one of the ã‚³ãƒ³ãƒ—REX mascot characters.

There are a few different versions, with the one above being the most scarce.

GCã‚°ãƒ©ã‚«ã‚ªï¼￾GC Gurakao vol.2 is available for pre-order starting on 3/19 and will be released on April 1st.

GC Gurakao is companion publication released by the fine folks at Mandarake under the ã‚³ãƒ³ãƒ—REX/Complex umbrella. It focuses on small plastic toy line based Mecha and transforming type characters/series.

Mandarake just added an English order page for this and some more pics...

Looks like it's sold out already. Do they have an English ordering page for the REX Comp books?