Well I've done my move & unpacked all my toys - finally I have some nice space for them!

Apologies for the quality of the pics - these were taken by my phone - better pics to come when my newest display piece arrives!

Just updated with my latest addition! Inspired by a pic I saw on LRG

Been a while since posting here but had to share this.
I finally completed my master set of Matchbox series 1 MIMP, thanks to some really awesome friends while helped me out along the way.
To celebrate, I made this custom MIMP shrine.
Hope you guys like it! It was a labour of love.


#415709 Reason for taking down Monster Collecting

I know I'm late to the topic, and I doubt it matters now, but it was this kind of stuff that made me stop caring about collecting in the first place.  Guys hoarding, paying outrageous prices for rare figures that they already had, and really just being complete asses about collecting.  The reason I loved this site so much was because of the camaraderie.  "What, you don't have that figure?  I have an extra, wanna buy it?"  Very common.  Dudes helping other dudes put together collections.  It wasn't a competition, it was guys who loved collecting, banding together and sharing the love.  After a while it turned into this battle, at which point it stopped being fun.  I still don't have all the figures that I'd like to have, but it's just not worth the trouble anymore.  And unfortunately, it was one collector that ruined it for me.  Was that my fault?  I dunno.  I didn't have to stop, but it was that collectors fault that I stopped finding it to be fun.  I like to think that I was pretty helpful and always willing to help out my fellow collectors.  Some people don't play like that.  Fine.  But now I've gotten to the point where, when I found out that someone started 'following' my photobucket account, where I have tons of MIMP photos up, and I recognized the name of the collector, I set my account to private.  That person made me not even want to share my photos.  That, in my opinion, is the definition of a person who is bad for the hobby of collecting.  I am proud however that one of my photos graces DW's Monster Collecting site.

Like I said, I used to LOVE this site, and not just because it helped me fill out my collection.  I met some REALLY awesome people here, people that I actually still think about to this day, having not signed in for almost a year.  Sites like this are what it's all about.  But sometimes people show up and make you realize what the exact opposite side of the spectrum is like.

I didn't read the whole thread, just the first three pages and then a few posts at the end.  I'm glad that DW has the site back up, but I completely understand why he initially took it down.  It's tough to be part of such an awesome community and then all of a sudden start being fncxed over.

As for myself, I probably won't return to hard core collecting any time soon, what with my one and half year old son, and another on the way, I've got other things to think of now.  But if I do return to collecting, this will be the first place I come because you guys (the vast majority of you, at least) are awesome.

I just wanted to gave a big thanks to everyone here and everyone who helped me finish my flesh collection.  It took roughly 6 months to complete.  If anyone has any questions, feel free to ask

This thread will all be behind the scenes stuff about the process of designing and sculpting then producing Tug O' War. I often get asked questions about this stuff so i figured anyone interested in that aspect might appreciate everything laid out in one spot.

Usually the original idea and design change significantly from concept to execution and that is exactly what happened with this monster. Here is the first quick sketch of the idea. Basically a monster with a tug boat on it's back used to disguise itself as it swims around looking for whaling ship to destroy.

Once the idea itself was approved work began. Of course basic changes take place throughout the entire process. Stuff like the pose being made more dynamic and other various details as well. Some stuff because it simply doesn't work well in clay but mostly because as weeks and months go by you just come up with better ideas along the way.

The head and torso took shape first. Both done roughly but when you sculpt in actual size for a mini-figure you really need to go step by step or things get much to big and ruin the scale easily. Using a clay that you cook in an oven makes it simple to cook as you go and add raw clay over whatever piece is finished. Overall the sculpt was probably cooked well over a dozen times before it was finished. 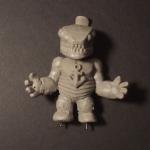 Then the hands came next which i had planned as the most detailed part of the monster from the very beginning. Something about the idea of a mostly smooth sea monster with skin like a shark seemed to work well with the contrast of some armored scales and tons of detail and texture on the hands. 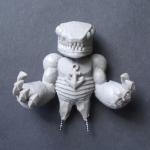 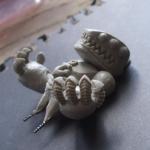 Then the arms which changed a lot from the original idea because i decided i wanted more of a muscular monster look rather then what you normally see with a classic giant monster. Obviously a lot of the creatures design comes from all the old japanese monster movies i love but at the same time i am always influenced by cool stuff from childhood like Street Sharks and Insectors. Which is why Tug O' War has so much muscle. 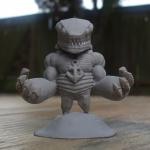 Next the legs and the boat were made. The legs i made as short and stocky as possible since it is mostly a sea creature and the boat was designed to look like a cross between a tug boat and a toy boat since i didn't want any part of this figure to be hyper-realistic. I always lean towards the overall look of a toy rather then a model just because that's what i like.

Then it all came together. The tail was a must otherwise i couldn't see this thing actually swimming and the shards of ice and crystals around the boat are just because if the monster was underwater and the boat was above the water it would look really cool. Plus it makes more sense because the boat has to be attached somehow. 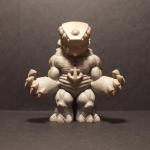 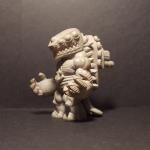 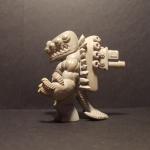 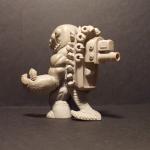 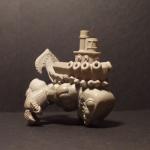 One thing i always tell everyone who asks for tips is just not to give up. This thing took months and months and changed over and over along the way. There were plenty of setbacks and mistakes. A couple breaks and one bad air bubble. There is no big secret to making a cool monster. It's just practice and time and effort and not quitting even when you really feel like it. You have to love what you're doing. It probably won't ever pay off as far as money for your time or anything else really tangible. All the effort and time and stress is worth it for me when i get a bunch of my toys in the mail to play with and when people tell me they liked what i created and when i see it on someone's shelf next to other toys i think are awesome. That's the payoff and for me it's well worth it.

I finally decided to get around to scrapping my ancient collection thread, and starting anew. My tastes have changed, my dwelling has changed, and so naturally my collection has also changed. (By a whole lot.)

This isn't everything I have on display, but one of my displays is waiting on some risers to look really sharp. (Right now it just looks cluttered.) A few are just straight up dusty so I want to give them a little cleaning before posting. 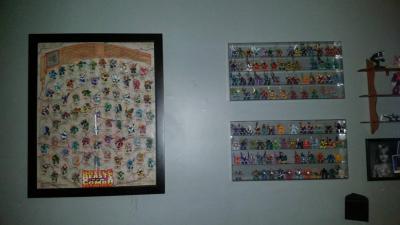 My Battle Beast collection, (which many of you have seen by now, I'm sure). One away from a totally complete set! (Including variants.) 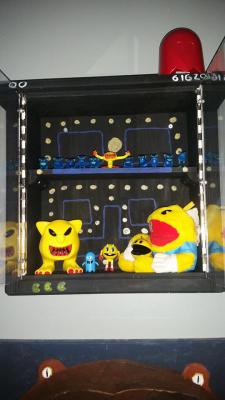 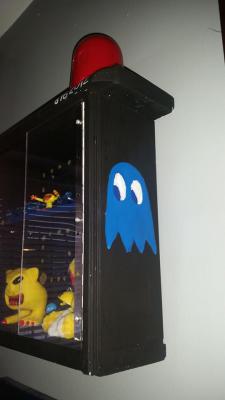 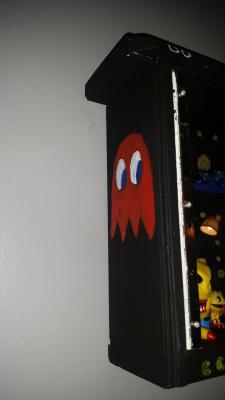 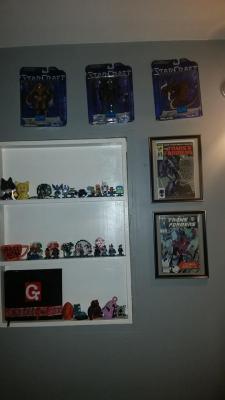 This picture didn't turn out, but due to the lighting of my place, I doubt it ever will. My Starcraft figures, (ON CARD!?), that I found in the wild for $10 a pop. Pretty sweet deal. My two favourite Transformers comic covers, and our Lego Dimensions stuff. (That's more of a family collection.) 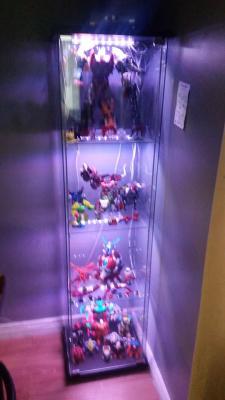 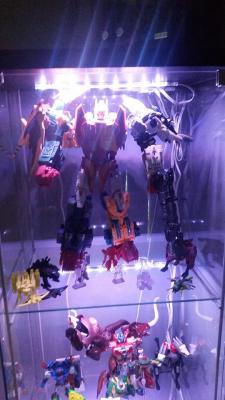 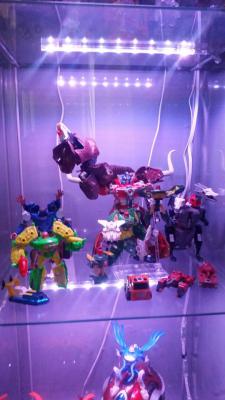 One of my all-time favourite Transformers characters is Cosmos. (He's a goddamn UFO!) I currently have every sculpt of him ever made except for TWO! (Both Japanese variants.) And a few other favourite figures/characters. 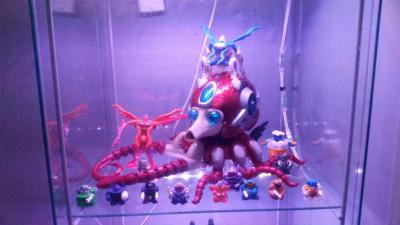 One of my favourite pieces in my entire collection, The Tako Tank with Ikard. I've also got some beast Wars minis up front, as well as some of those newer minis from the various generations. 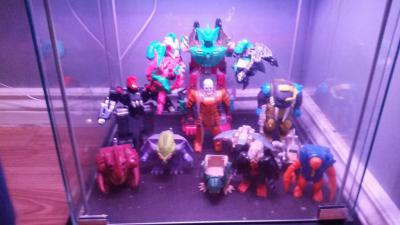 Here's a nice vintage shelf. The Pretenders are one of my favourite lines from Transformers, and these are, naturally, some of the best. (In my humble opinion.) There's also a really cool Tomy Tribot in there, (the black figure), and my all-time favourite combiner, Piranacon. I'm trying to pick up one each of his variants, but it's hard to do on the cheap. For the trained eye, you'll notice two parts of the King Poseidon combiner in there too.


That's it for now! More to come after some cleaning/sorting!

Hey guys. Minus Satan Cross, I finished my poster set today. Would like to thank TinyPink for helping me get started, Plasticfiend for giving me the last figure I needed, and ToyMeetsWorld for giving me one I wanted on the side. Also, thanks to everyone else for the wealth of knowledge you provide here!

This is something I've been working on for about a year now. When I started going after a full set of Real Ghostbusters companion ghosts, I noticed there wasn't a guide or checklist out there for them, so I photographed mine and pieced together this document as I went along. Finally finished it now that I'm done with my set!

In addition to photos of all of them I included name, series, year, and what figure or vehicle each came packaged with.

The only ones I don't own are the Ecto-Glow Heroes ghosts, which I'm pretty okay with since they were just repaints anyway. For the guide I was able to find auction photos of those that I could work with.

I hope you guys find it helpful!

And for fun, here's a pic of the whole gang I just took today: 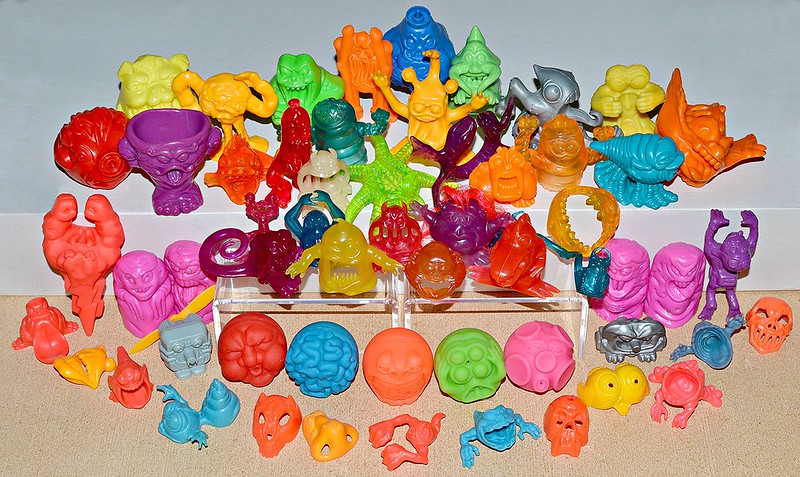