67 replies to this topic

Between this and George actively trying to damage any possible competition, no matter how small by comparasin... it really should fail.

Seeing how each funded level percentage fell each time with the latest Series 3 barely reaching it at 104% it will be difficult for this 4th Series KS campaign to succeed, if not just barely make its goal. So the likelihood of it failing seems to be increasing making it questionable if even Series 5 will ever see the light of day, which might also explain the lack of submissions this time around in the current S5 contest. It seems OMFG! luster is wearing thin which is the common and inevitable fate of all toylines eventually.

yeah omfg needs to die, all it is now is a place to send drawings for George to sculpt. Let him come up with his own designs.

$20k is definitely going to be tough. I'd have to disagree about the characters though. For me, all 5 of these are on par with the Series 1 figures in design.

If it funds, I'll be doing green again.

Assuming that they get the same amount of pledgers as last time, and the MSRP goes up (I am guessing $12.99 for flesh and more for black) then they might squeak past. Certainly going to be tough though.

Maybe they will put some money from exclusive color buyers into the KS like they did with $4K in S1, but OT loses money on whatever % of that goes to Kickstarter.

I hope it makes it. I like the S4 designs and I'd rather see the artists involved get their figures produced for free.

iwao, on 14 Jan 2014 - 3:02 PM, said:
Maybe they will put some money from exclusive color buyers into the KS like they did with $4K in S1, but OT loses money on whatever % of that goes to Kickstarter.

I think they need the $20k for the molds and initial run of flesh and black. If they hit the amount with the exclusives bundled in, they would probably be $4-$5k in the hole from the get go.

I find it weird that they have to keep going to Kickstarter for each release, havent they made enough money to fund this themselves? or at least to a point that they dont need such a high funding limit? i always thought they were gonna put excess money into the next run, i dont think they ever have.

They sell blister carded 5 packs for $10 and they only make money on the few colors sold in the OT store. I'd be surprised if they made anywhere near $20K in profit on the first 3 series combined.

The Kickstarter is a pre-order with free shipping (in the US) and some bonus figures. Not sure why that is such a turn off to so many people. My pledge isn't a donation to help them produce the toys. It's a payment for the toys they send me.

I hope Series 4 makes it, especially for the people whose designs were chosen and who are undoubtedly excited about having them be a part of the line. Plus, it's the set that appeals to me most since Series One.

$20k is a lot of money, but I really won't be shocked if they're able to get it. In the past I had doubts they'd reach some of the amounts, and it always seems to pull through regardless of increases. Granted this is the largest increase so far (I think?), so we'll see what kind of incentives they pull out.

Like iwao, I really don't mind that they're still using the Kickstarter approach because it's basically just a pre-order.

At $10 a pack of 5, that's $2 each mini figure, which is really a good deal, but even with many sales, OT's profit margin is probably far less than one thinks, and I don't think it's out of line to keep bringing OMFG! to Kickstarter, I've seen far worse examples of that from other companies and they made into the millions and still go to Kickstarters, with OMFG! were talking only a few thousands of dollars made, now they finally decide to set the bar higher with a more serious goal of $20k, that doesn't surprise me much since they want to keep the retail price still low at $10.

All toys came from the original One Toy

It'll be interesting how things play out from here.. What with series 4 producion issues, the new $20K kickstart funding quota and now series 5 submissions dropping off like flies... Personally I don't want to see it end, just improve as each series gets made.

Running each series through Kickstarter is the best way to make sure that the winning entries have enough of a demand to be viable as a PVC series. To me it is a no-brainer. If the winners aren't really that good, the Kickstarter won't fund and no one is out any money for a failed release. If it does fund, then you know for sure that your production costs are covered.

By doing this each time, you eliminate the chance of a wave/release that no one wants.

Painted prototypes of S4 figures in the front of the display case. Kickstarter should be coming soon. 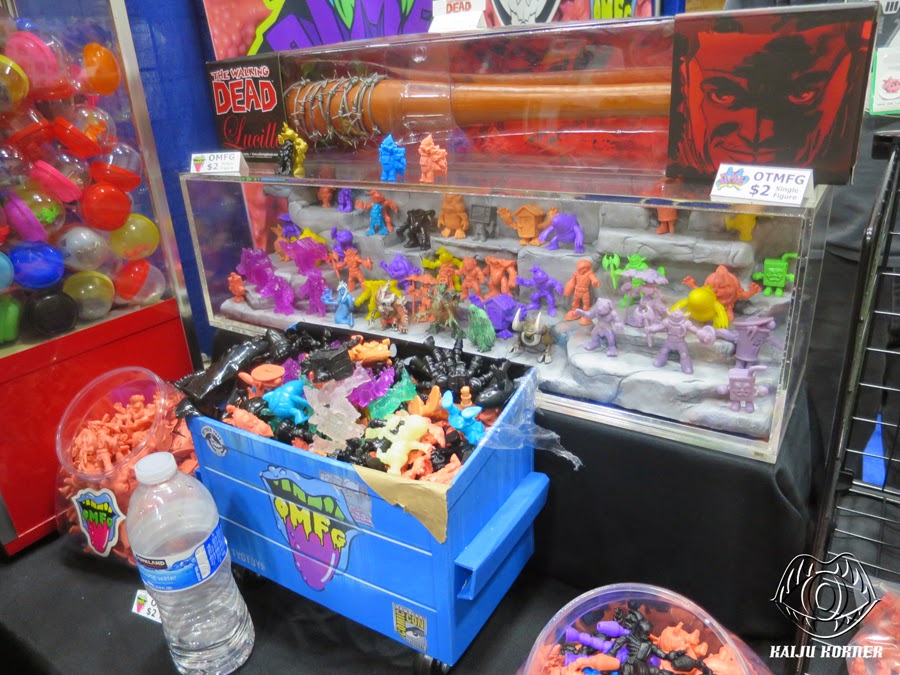 Thats the first time I've seen the protos for S4, not bad! Kinda hard to make out but. Bullseye looks like he needs to go on a diet.

My name is matlock and i am a lrg addict.

there not mexico? what the heck. George. Three thumbs down. although i like most of the sculpts this time. except the two that look exactly like mimp

George announced that the kickstarter will start up today for series 4!!

Idk, I enjoy omfg for the concept & packaging but have to say many of the sculpts don't interest me. I think 1 of every 4 is what I have liked in the past. But hope we get a series of great sculpts soon