The Worst Action Figure Ever?


91 replies to this topic

Dollar tree has a generic ninja action figure that is transparent green and has a hand gun with other various weapons. Probably the worst i've seen mainly because of the green. And the hand gun doesn't help either. But man you gotta love dollar tree.

Dollar tree has a generic ninja action figure that is transparent green and has a hand gun with other various weapons. Probably the worst i've seen mainly because of the green. And the hand gun doesn't help either. But man you gotta love dollar tree.

I saw that guy today, I thought it was kind of cool he came with a hand gun. What does a ninja need with a handgun?
Not a dollar worth of cool though.

I bought some of the smaller dollar fig ninjas a number of years ago. The ones that came with weapons and clip on armor. A couple of them broke right out of the package.

I didn't even get a dollars worth out of em.

How about instead of one particular toy, we gobsmack a producer of toys. Diamond Select toys pops to mind. I don't see anything remotely toyish about ANYTHING they've produced. Take for example their butchering of the Serenity action figure line. Here's a particularily acurate review http://www.mwctoys.c...IEW_090505a.htm

For that matter, the majority of action figures produced today should be called statuettes, there's nothing actiony about them. Hasbro Star Wars figures suffer from this hyper active attention to details to the point the playability of the figures have suffered. They've essentially sold out. Caved to their idea of what the 'collectors' want.

Look at the Justice League Animated action figures for example. These have good sculpts but have you ever tried to stand one of them? Good freakin' luck. Try putting one in a sitting position. You're in for a good laugh there.

But if I had to pick one figure out, it's Malcolm Renolds from Diamond Select's Serenity series. I LOVED the show and movie, but the figure.... fit for the pit.

*steps of the soapbox*

"Life and death appeared to me ideal bounds, which I should first break through, and pour a torrent of light into our dark world."
-Frankenstein; The Modern Prometheus, Mary Shelley

I'm sorry, I know this is an old thread, but I couldn't resist it. I had to.

I remember when this came out. It was packed with a display case, and I kicked myself because I had bought the first release that came with Wedge, but wanted the scanning trooper too.

glad I didn't. In hindsight, I'm much happier with Wedge.

If Jim Henderson was still around, he would be completly pissed off that someone is making hanged muppets

In heaven they call him "Whirlin' Jim" ever since those things were made, since he's been spinning in his grave.

And the name's Henson. Jim Henson.
"Anyone got any aspirin? I have a splitting headache..."

But if I'm going to rag on someone,

, I might as well put in my two cents.

I've always been a very conservative toy collector. Most everything I collect has been play-tested, either by a friend or through a friend, and I never EVER go after a movie or TV line. Hey, I grew up in the 'Raised-by-Star-Wars' generation, too, and was a Star Trek fan for many years, but never felt the need to collect it all. Also, everything I collect is within the 1-3" range, which makes storing and displaying a lot easier. With the exception of LEGO Bionicle, and I'm almost sorry I got into them. Not only are they hell to pack up and move, if the need arises, but I've also never found a great way to display them.
Now, if I had to choose my greatest disappointment, I would choose to mention McFarlane Toys 'Signs of the Zodiac' release. I first saw these at Spencer Toys, and immediately I was intrigued, and could already see the display potential! Think of it: an entire shelf, each hideously disfigured creature with some sort of backdrop connected to it's astrological identity. My sign displaying some significance. The first four were Aries, Cancer, Gemini, and Taurus, and in typical McFarlane style, were well-detailed, sculpted, and looked fantastic! I waited til they were on clearance, snagged the crab-hybrid sea monster Cancer sign.....only to find out they were scrapping the line after the first four. AAAAAARRRGGGGGGGGGGGHHHHHHHHH!!!!!! On top of all that, the piece of crap broke days later.

Yep, everything McFarlane I've ever owned broke way too readily.. except for my McFarlane Tetsuo. Love that guy!

I doubt this is a candidate, but i thought i would include it.

He Comes mainly with an 5 point articulated crocodile (the back could hurt somebody though),He speaks several phrases, but the worst aspect is the creepy facial expression and the hair doesn't suit him.
(I don't have it, it's from a youtube review)

Destroyed Cassandra as they actually sold an empty frame.

Currently my worst figure.. i wouldn't call it an "Action Figure"... Is the Pop! Dr.Who Dalek. Couldn't even take it out of the box. 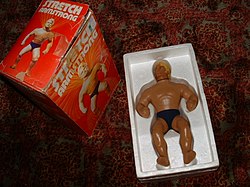 My best action figures are at my grandmas because my kids play with them when we go over there.... TMNT pizza  Thrower

He Man and Battle cat are still alive at grandmas too I totally forgot this thread existed. Now that it has risen from the grave, hopefully some more noobs can drop their input in here.

I loved this thread!

Okay, not an action figure...and maybe it's just my luck with this one.

We had an annual "aviation week" at my elementary school, and it (like the book fair) was really just a way to sell overpriced merch to children.

I think my parents paid between $10 - $15 for one of these things. I got it home and tried it out for the first time. Boom. Broken.

I took it back and got a replacement the next day. Same deal. Broke on the first yank.

That was the end of aviation week, so I didn't even have a chance to replace it, even if I thought the third one would be better than the first two.

Best toys of my childhood had to be these Power Rangers knockoffs.

They were available in the same scales as the official figures - some around 5" and some around 8".

I would argue the quality of paint/plastic was equal between the real thing and the knockoffs. Plus the knockoffs had more articulation.

I had a lot of adventures with these guys. The blue 5" was my avatar in many a play session.