26 replies to this topic

There are duplicates among the visible figures, but all 18 packs were indeed unique.

(Edit: In hindsight I think there might have only been 16 unique packs rather than 18.)

Conceivably, this means that the whole series is contained within one wave (18 X 8 = 144, and there are 90 to collect in the base set).

Unfortunately, I could not spare $180 in one drop to find out.

(Edit: Absolutely not the case at all.  There will be at least two distinct waves to collect the set.)

Also, add what figures are in the blind 2-packs based on any identifying numbers stamped on the packages.

For a general discussion of the toyline, please use the "Mega Thread" here:

I put some photos of the Gross Homes over there.

There are six visible figures per 8-pack, and the two hidden figures are at the bottom.

Each 8-pack also has one poop (or two when a metallic turd is included).

The two hidden figures will be the same per unique pack, but I suspect the poop(s) included is/are truly random.

Here are the first two 8-packs that I got.  The hidden figures (and poop) are at the bottom.  If you want to contribute to this tracking thread, this might be the best way to illustrate the pack contents.

Conceivably, this means that the whole series is contained within one wave (18 X 8 = 144, and there are 90 to collect in the base set).  Unfortunately, I could not spare $180 in one drop to find out.

HAHA.  Did I really think that Moose would be even that accommodating?  Or course not.  It is already evident that there will be another wave to track down in order to complete a base set.  Who knows when, where, or if this wave will arrive.

Like other releases, Moose has intentionally excluded certain figures and certain colorways from the initial wave.  Figures like Dork-Shire Terrier, Junk Russel, and Spewy Spider are not in this wave at all. Hopefully, Moose will do an abbreviated second wave of only 8 or 9 new packs.  But, I have to warn you that if they follow their typical release strategy there will be more like 16 or 18 new packs and a huge glut of duplicate figures acquired in the process of tracking down one set.  The base set will probably end up being 36 unique 8-packs.  This is $360 dollars -- or over $440 when you add in the Gross Homes and two additional playsets.

Just a $440 warning for completists.

This will yield 198 duplicates.  If you could get price-paid ($1.25 per figure) back by re-selling each duplicate, then that's about $247 back.  So, there's that as a possibility.

There is always the additional hiccup that the second wave will not actually be released or will be limited to some strange geographical region or obscure discount store, making completing the set even more difficult and expensive.

To find yourself a gold turd, look for the red crab.  Notice that the same pack has variable crap.

Here's the pack I got today: 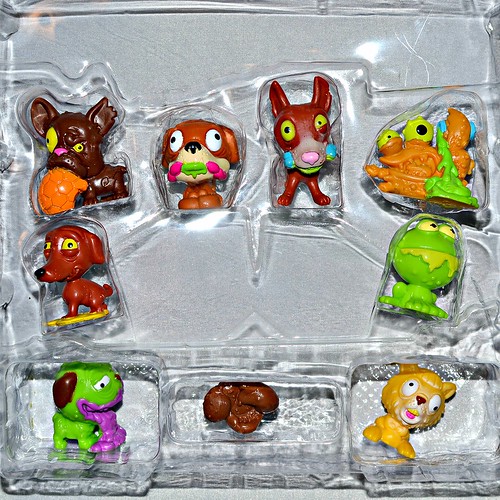 Got this one today

Hi - I've picked up a couple of these and kinda dig them. Thinking of adding them to Toy Collector - anyone interested in helping convert the checklist from a pdf to a list in excel? Perhaps someone has already that and can send my way? That way I can quickly add to Toy Collector to help out all the completists. Thanks!

Picked up the two obvious Spewy Spider packs a couple weeks ago.

Also Series 2 has been out since before Halloween.  There are 3 packs of 20 available that TRU.

Wish I would have found this board sooner, I was looking for a puggly for xmas and got lucky and got a grey one in a can, but this could have saved me time and money.  I ended up going out on xmas eve to walmart and picking up one of the packs with the Green Puggly.

I've been watching a lot of videos on youtube and noticed one of the packs posted here had a limited edition in it, but otherwise the layouts seem accurate. I also picked up 2 more 8 packs as xmas gifts that haven't been posted here yet, so hopefully I can see them open them and post the results.

Both had only one poop.  I think the first package listed had a yellow sticky long poop and the other was a brown sticky with some type of track (I think tire, but didn't get a close look)

Series 2 of these is out in UK now Ive only seen 4 packs of them though. Much better figure variety there not all dogs begin sick this time and quite alot more fish based ones like jelly fish/puffer fish/sea horse and a snail. They also have got rid of the sticky figures for glow in the dark skeleton pets instead. Shame no where ive been in UK ever seemed to get wave 2 of series 1 so no spider for me.

Anyone in the UK who wants me to get them a spider pack, I will do so.  The TRU near me has the other two spider packs (orange and black, see photos above).  This is the only 3rd spider pack that they had.  There is a possibility that I could check another TRU if you really want all three.  Just pay actual cost, $10.85 US per pack, plus actual shipping.  I will send all figures from the actual pack or the whole pack if you want them unopened for some reason.  Anyway, just trying to help.  If Moose follows the usual shtick, they are going to show up at Poundtown anyway, along with some other figures not released in the US.

Here is the Series 2 checklist, front and back.

White toadkill can be found here. .

And if you're looking for the dark brown smelly shihtzu..

Here's the white puggly and dark brown Maggoty Mastiff hidden in this 8 pack.

Here are two packs from Series 2.

I gotta get my hands on that red Turdle.

Unfortunately, unlike with Mutant Mania, the codes can't be seen without opening the packs, so you'll have to distinguish between them visually.

I figure W2 probably means Wave 2, and that there are "only" these 18 assortments available.

Get your own easy-to-use M.U.S.C.L.E. or MIMP Series 1/2 checklists!
Back to Moose Toys

Also tagged with one or more of these keywords: ugly, uggly, ugglys, moose