5 replies to this topic

Just wanted to give you a heads up that last night I banned SixthWizard.

About a year and a half ago, we worked out a deal to trade a couple of Zectron Tug-O-War figures for some shirt printing at his job.
One of the Tugs was a first release dark green one. I sent him that one initially in good faith. The second tug was going to be sent once the shirts were done.

I reached out to him again the other day for an update. He mentioned that he was sorry. That he was no longer in a position to do the deal, but that he would check back with his boss to see if the deal could be salvaged.
It couldn't.

So I said, no problem. Send me back the green Tug.
Well, he says he sold it to a friend for $15 a while back.
Mind you, this is the figure that he had been searching for, for almost 2 years, when I offered to trade him mine towards some shirt prints.
We sold this figure initially at $15 and they sold out in minutes. Aftermarket on the Tugs has been exponentially higher. This was also the very first release and had extermely low numbers Hence the market value.
Needless to say, when I sent it to him, almost two years after it was released, the value was crazy high already.

Sixth didn't like that at all. He offered me $20 for it.
I said no. Either replace the Green Tug I sent you, or pay me the value.
I also gave him the option to trade for some other stuff.
Lastly, I sent him a link to one on eBay that had a current bid of $49.99. He might have been able to win if for a lot less than $135, and then send it to me since he owed me one.
He still insisted on trying to pay me $20.

We went back and forth and he REFUSED to make it right. So I banned him for being a thief.

Here was my last reply to him.

Why do I keep replying? Because I am giving you opportunities to make this right and not to rip me off. I'm giving you an opportunity to be an ethical, honest person.

This is what we've done so far after me patiently waiting a year and a half for you to complete your end of the deal.


Me:
Send me the green tug.
You don't have it? Ok, send me a replacement green tug or the market value.
What's the market value? Let's see what they have been selling for recently.
$135 - $155. Ok, let's go for the lower end of that.
Or, let's go for that cool purple painted one.
Or, lets work out a trade.
Or, here is one on eBay for half the current market value that you might be able to win.


Your response? Sorry, I sold it to someone for $15, and even though it would cost me multiple times that amount to replace it, I will only offer you $20.
Oh, you don't want to be ripped off at $20? Then sorry about your luck. I refuse to make things right on my end.


That really sucks man. Really it does.

Side note. Apparently he has flaked on some other deals. I'll let them post their experiences with him, if they want.

Eh, I had a deal with him, and he didn’t keep up his end with me either. After a year of waiting around, and unanswered messages, I finally got a response after telling hi. He could respond publicly or privately. He finally responded, and I told him to keep his end, forget the deal, and to just keep my name out of his mouth as “payment”.

Of course he gloated to Karis about doing the same to me, as some weirdo rationale for why it was okay to cheat people?
I’m not telling anybody to not deal with him, but do so at your own risk.

Yepppp, you'll both recall that chain PM from a few years ago where I called out this guy as a lowlife/bullshitter/ball of negative energy....tsk tsk tsk tsk.....first impressions are almost always on point, and I always trust my gut.

(Which in my case is a lot of trust -- huehuehue!) 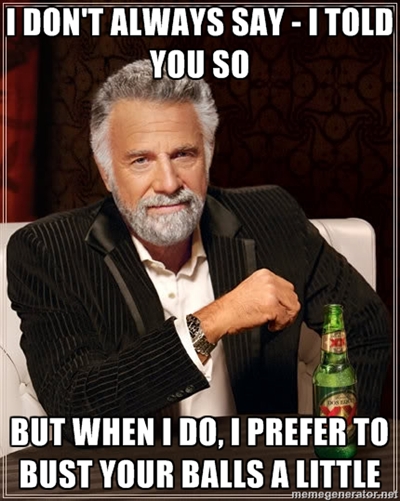 Bummer that you both got ripped off.

Jeez that sucks. I always find it a little odd when someone is part of a community and burns then decides to just start burning bridges.

Saw some of this drama play out a little on IG but didn't know the full story.

Good move on banning him.