15 replies to this topic

Some of you might have seen my recent post about these, and the successful identification as Thor Lords from Creata International. They were released in 1982, and other than that it's been very difficult to find any information. The rubber is quite soft, almost mushy. The style of the paint applications are reminiscent of cheap Chinosaurs, though if you look closely on both figures you can see what appear to be overspray or spatter marks from the application. If you look at the base of the robot you can see the red paint has faded/flaked off in areas. The demon show little to no signs of wear on his paint so it seems he might have fought fewer battles on the kitchen floor.

The story of the two that I have in my collection is also quite mysterious. These were purchased for my brother by my grandmother and kept in a toy box at their place so we would have things to play with when we visited.

The unusual thing is that my grandparents are both rigidly Christian and would surely not have approved of me playing with such a demonic looking toy at such a young age (the robot probably would have passed), but nonetheless they remained there for years until I finally saved them from being thrown out. I have no idea where these were purchased, other than the USA Midwest.

It would be interesting to track down the owner of of the opened carded figure that irbaboon posted. (are you the owner btw? I hope you don't mind that I edited and reposted it here. If you know the original owner and want me to remove it I'll just post a link. Just wanted it here for documentation purposes)

Anyway, here are some better quality photos of the two figures I have to show. Hoping to see some more show up eventually, though it seems collecting these might be difficult! 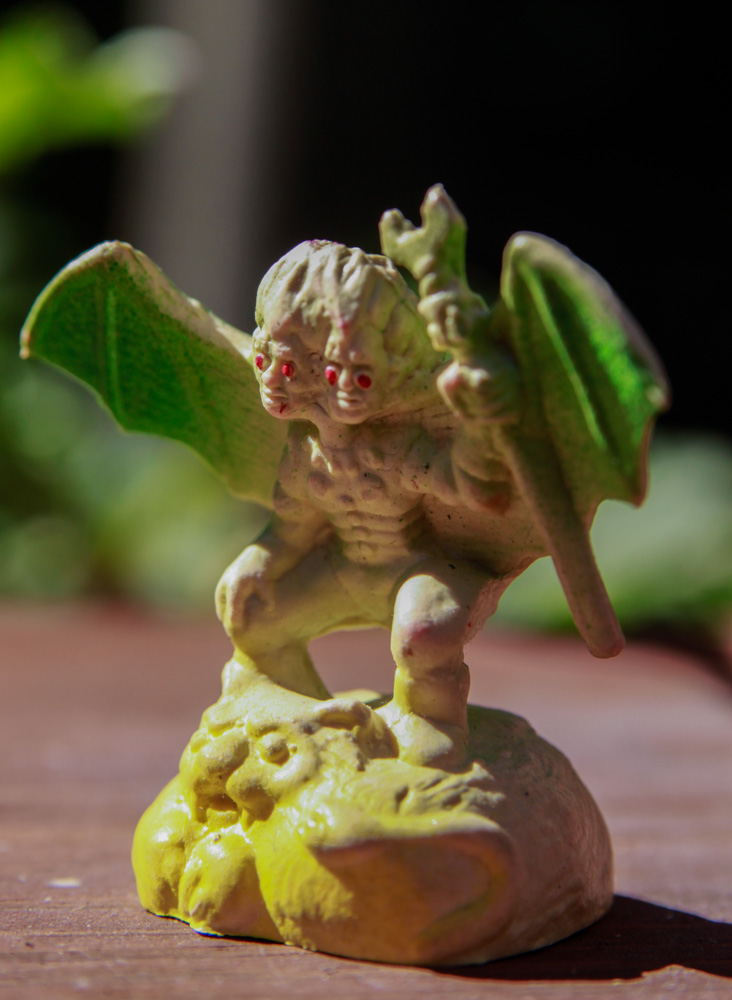 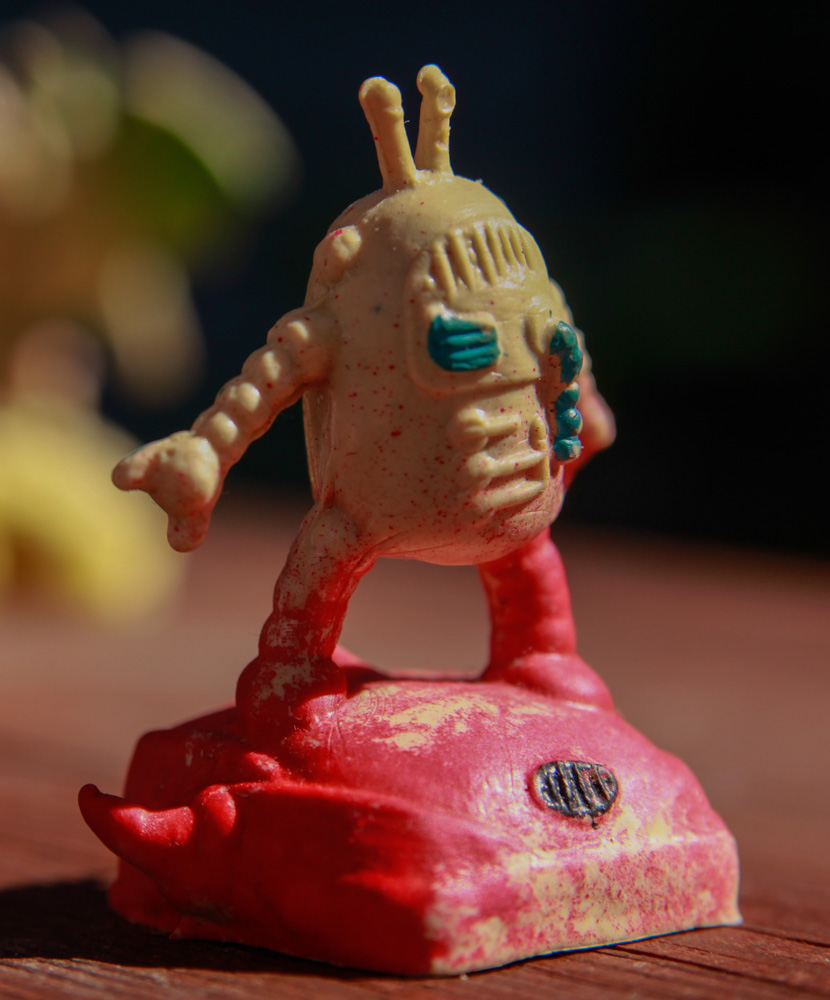 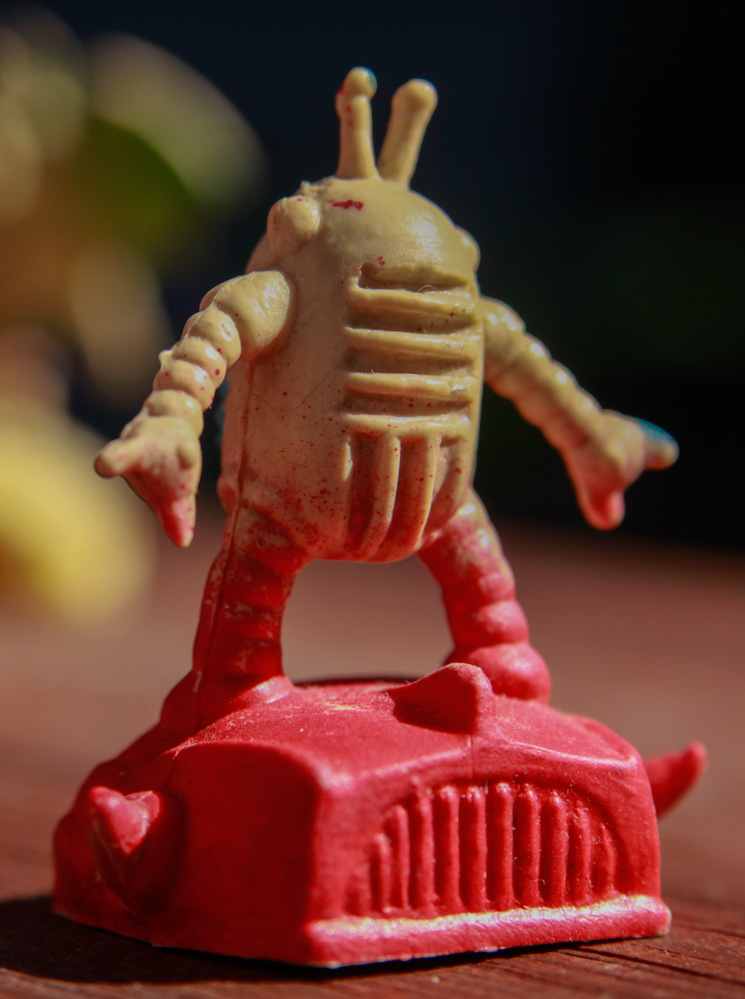 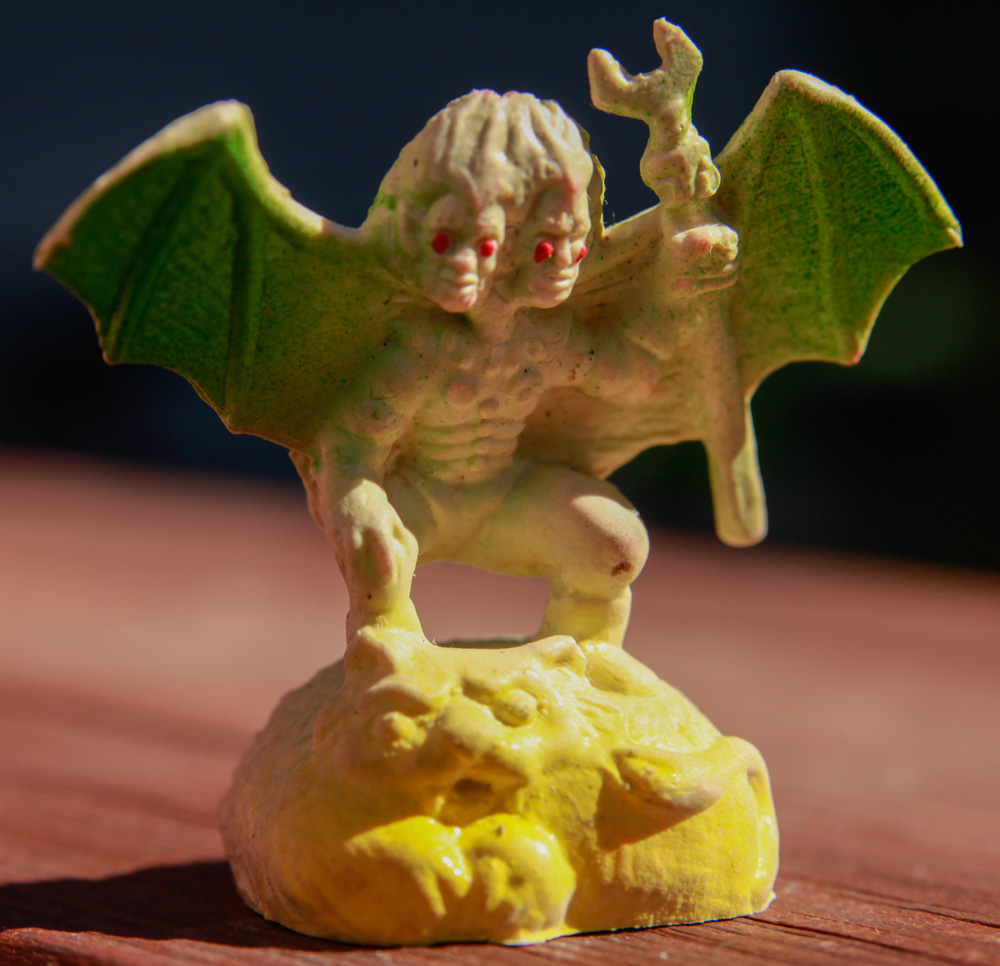 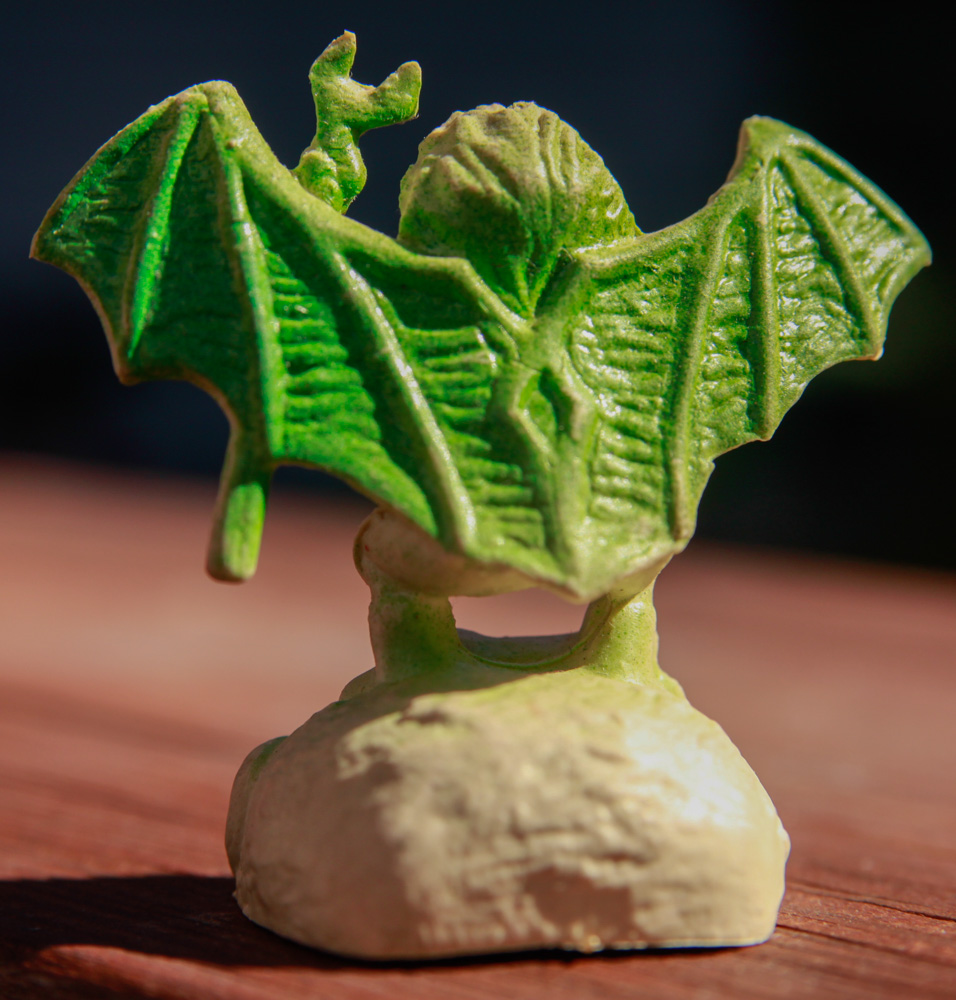 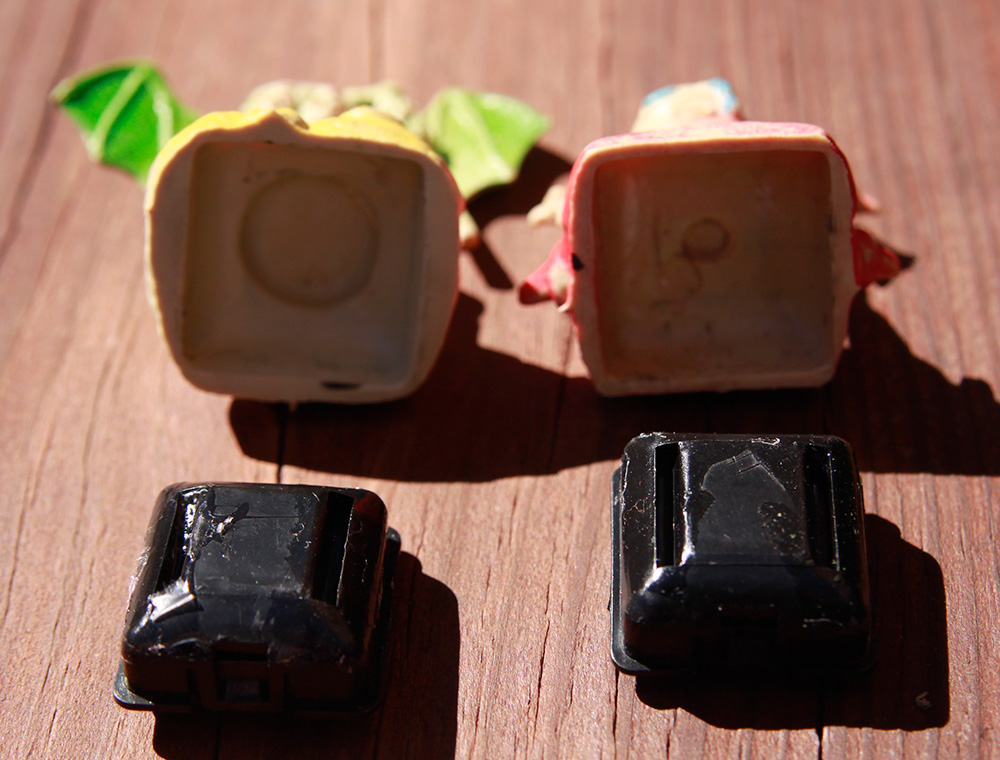 As you can see, I discovered that the rubber figures could pop right off the motorized bases, which made for easier arranging for photos. It appears that there was some glue bonding the pieces together at one time but it has long since dried out.

These look interesting, but I'm not a fan of the motorised base. Still, both figures are nice (especially the demon) and you hit the nail on the head with the chinosaurs looking paint apps. Hope to see more of these!

Love that demon design. Puzzling unwary adventurers with intricate riddles. One head telling the truth and the other lies. Maybe.

Great photos of these guys! I am really curious to know how many different creatures were part of this line. I did a search and couldn't really find anything else out, either. Hopefully some more information will surface.

Great photos of these guys! I am really curious to know how many different creatures were part of this line. I did a search and couldn't really find anything else out, either. Hopefully some more information will surface.

Well well, lookie what just popped up on eBay!

Looks like we can add dinosaurs (or dinosaur-esque) sculpts to the list! I can't 100% confirm that these are from the same series but the size and rolling bases are identical so I'm making the logical leap.

First guy looks like a brontosaurus/airplane hybrid, while the other appears to be a mix between an ankylosaurus and a walrus with insect-like details. I am so bidding on these!

Well well, lookie what just popped up on eBay!

Good looking out! Those two aren't QUITE as amazing as the two you already own, but still pretty damn special in that bizarre '80s fantasy toy way.

If you win that auction you're probably going to have the biggest Thor Lords collection on the planet, haha.

If you win that auction you're probably going to have the biggest Thor Lords collection on the planet, haha.

Talk about big fish in a small pond

And yeah I would love to see some more D&D style figures but considering the obscurity I'm not complaining. I think it's awesome that the sculpts are so varied.

EDIT: Just came across a higher res version of the logo and could read the tagline for this series (which sounds like it was written by an engineer): Also learned from the trademark registry page that their copyright expired for these in 1985.

They didn't file for the name until 1984, so considering the bottom of the motorized bases are marked 1982, that tells me that the bases were being re-purposed from an earlier release, or possibly these figures were previously sold under another name before being packaged as "THOR LORDS".

Talk about big fish in a small pond

And yeah I would love to see some more D&D style figures but considering the obscurity I'm not complaining. I think it's awesome that the sculpts are so varied.

EDIT: Just came across a higher res version of the logo and could read the tagline for this series:

I guess that tagline, if not very creative, is pretty spot on.

I was just thinking I'd love to do a post on these on my site sometime in the near future if you wouldn't mind contributing some of your great pics for it. Especially if you win the dino & dragon, there'd be a nice selection of them to showcase.

That brown dinosaur thing looks suspiciously similar to the awesome Dinotank from Ultraseven. There's enough difference (and vagueness of the sculpt from those pics) that I wouldn't rule it as an outright ripoff, but you never know. Creata is definitely one of those more derivative toy companies.

Thanks to some coordinating with a few other members, I've been able to get my hands on some carded examples of these guys. These came from the UK, and were released by 'Hales' instead of 'Creata International', but otherwise appear to be identical figures.

Two of the figures I already owned loose (Robot and Brown Insect/Dinosaur), but there was one new sculpt that appears to be a blue Kali riding a manta ray/whale. I'll be posting some more pictures of these guys soon. Couldn't resist freeing him from the packaging so he could join the rest on my shelf. 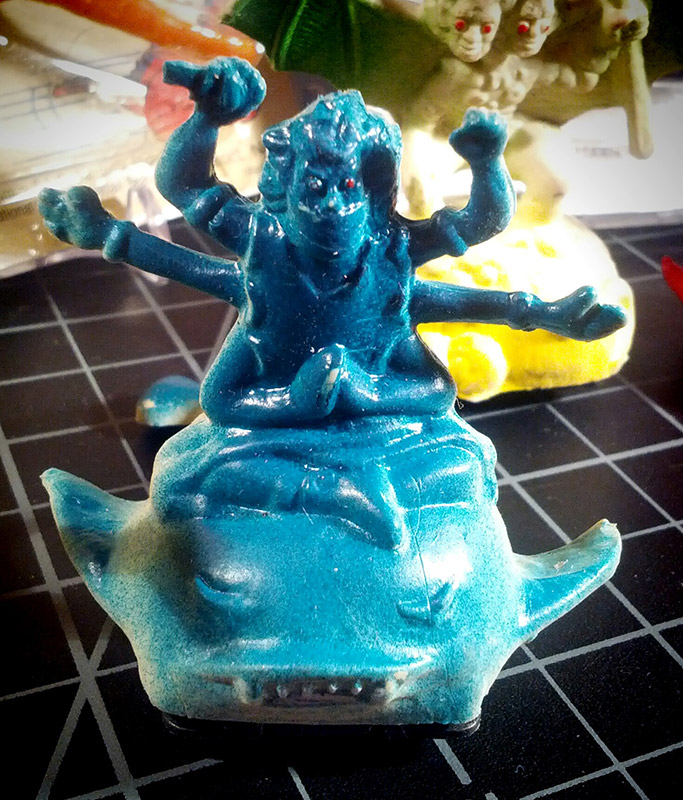 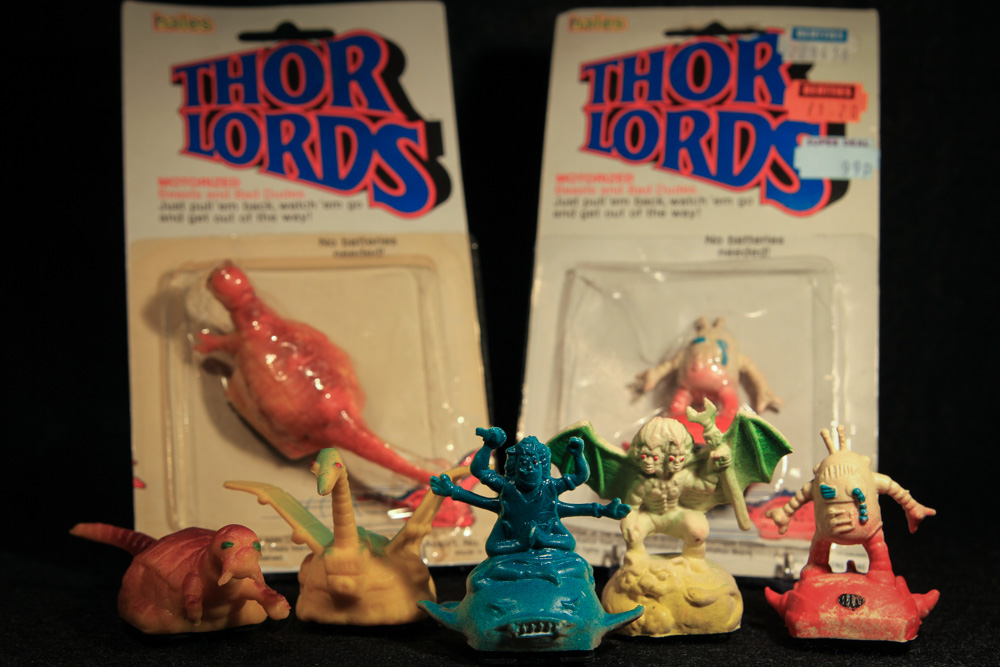 Fantastic! I think I'm in love

While I'm here and before I forget, here is the most recent shot of my collection including the recently acquired "Mayan Octopus Sun God".

I would love to find and interview the artist who came up with these designs. Not the best technical work, but such bizarre, brilliant concepts.

sorry, just saw this, but yes these are quite small. The bases are roughly 2" square.

I'll add my photo of mine here too, for documentation's sake. Happy to know what they are!

I may have had more at one time; that walrus-o-saurus looks familiar. Mine were purchased in Oregon, probably in 1983-84 or so. They would have come from either Toys R Us or from a small-town variety store. I suspect the latter is more likely.